Is there a future for diesel?

Introduction
Is the above question valid? By changing mobility - self-driving cars and means of transport - diversity of customer needs, alternative instead of fossil fuels, sustainability, etc., the Break Even Point of various types of fuel is changing. Curious about BEP between petrol : diesel or petrol : electric?

Break Even Petrol: Diesel
Until 2013, the Break Even Point to switch from petrol to diesel was around 30.000 km per year. Between 2014 and the end of 2017, the annual mileage was around 40.000 km. Due to tax and excise increases, a reduction in the value of diesel cars and an ever smaller difference in fuel prices, the BEP has now increased to 50.000 km per year!
There are differences between segments. Our recommendation is to reconsider your diesel allowing car scheme. The figures show that only a - small - benefit can be achieved with extremely high annual mileage. Cars not meeting the break even point will cost your organization more money.

BEP for Electric Vehicles (EV)
This year several new electric cars will be introduced to the market with a battery range of 300 km and more. With this new offers electric cars are a good alternative for business use. As most lease cars drive less than 35.000 km / year or at 220 working days per annum: 160 km / day. 'Refueling' i.e. charging, is becoming easier because rapidly increasing numbers of fast-charging stations, where up to 80% can be loaded within 10 minutes.
The Break Even Point to make the switch from petrol to electric is already around 25.000 km / year. Above this, the EV is more cost-effective than a petrol, with benefits of more than 5 cents per kilometer! See the table below. 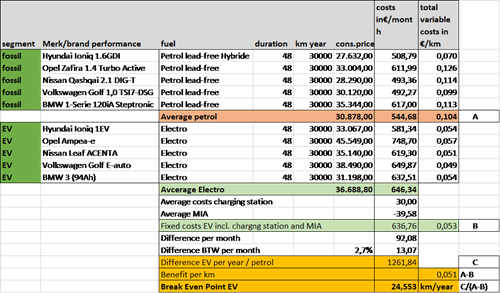 Advice
Traditionally; a diesel car exceeds 40.000 km / year. It is important to reconsider the segment level. It is strongly recommended to take out the diesel or to
increase minimum mileage to 60.000 km / year.
The big question is: what is actually still to benefit of a diesel? The savings per kilometer for mileage above 60.000km is only at the level of 3.5 cents / km. 10.000 km / year more than the BEP results in a relatively small benefit of € 350 per year
But then you have to drive 70.000 km per year.

Resume
The diesel is in fact “out” and the lease rates are expected to go up due to decreasing residual values of diesel cars.
We therefore strongly advise our relations to review their car schemes and to “de-diesel”.
In addition, it is also more favorable for the driver to opt for petrol instead of diesel because of a lower tax addition for the driver.
A new serious option is driving with an Electric Vehicle. For sure something to pay attention to in the future, taking all the new developments of the EV into consideration.